The chimpanzee along with the bonobo are humans’ closest living relative and share around 98% of our genes. Chimpanzees exhibit very little morphological differences between subspecies although there are differences between males and females. Chimpanzees have longer arms than legs and opposable thumbs and big toes. Chimpanzees are all black but are born with pale faces and a white tail tuft, both of which darken with age. Visual and vocal communication is very important in chimp societies and a wide range of facial expressions, gestures, sounds and postures have been seen during interactions. Chimpanzees live both on the ground and in trees and all chimpanzees build sleeping nests in trees at night. Their usual gait is knuckle walking on all fours although occasionally they stand upright and walk upright like humans. 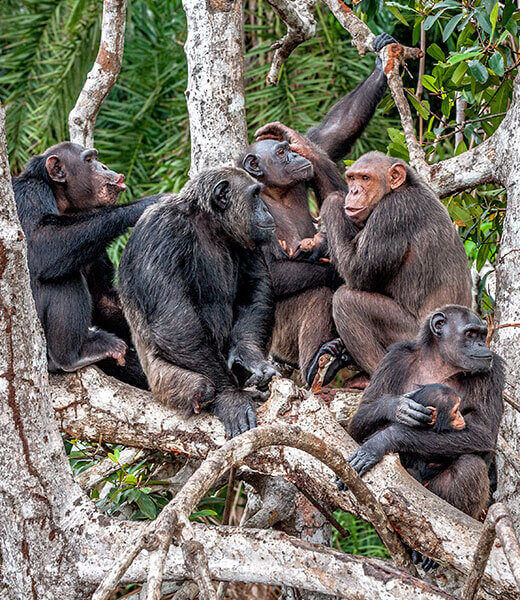 Chimpanzees are found across a west-east belt near the equator in central Africa. Their range spans 22 countries: Angola, Burkina Faso, Burundi, Cameroon, Central African Republic, Congo, Côte d’Ivoire, Democratic Republic of Congo, Equatorial Guinea, Gabon, Ghana, Guinea, Guinea Bissau, Liberia, Mali, Nigeria, Rwanda, Senegal, Sierra Leone, Sudan, Tanzania, and Uganda. This represents a total area of about 2.5 million km² though the majority (about 3/4) of the total estimated population can be found in only two countries, Gabon and the DRC.

Populations in captivity: As of June 2016 there were 1416 chimpanzees registered in zoos. 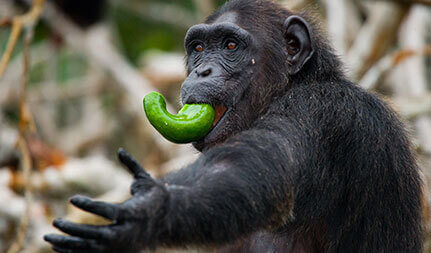 The chimpanzee diet consists mainly of fruit, leaves and buds supplemented by seeds, blossoms, stems, pith, bark and resin. Chimpanzees will preferentially eat fruit over most other food types; however often supplement their diet with invertebrates, birds, eggs, honey, and occasionally mammals. Chimpanzees have been seen to actively hunt for red colobus monkeys, blue duikers, bushbucks, red-tailed monkeys, yellow baboons, and warthogs. Chimpanzees have been noted to modify natural resources to obtain food sources and sticks, rocks, grass and leaves are all commonly used as tools to acquire honey, termites, ants, buts and water. 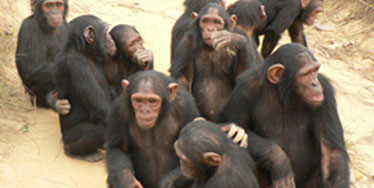 In the wild chimpanzees live in multi-male multi-female “fission-fusion” communities with a highly complex social structure. Groups are made up of smaller bands or parties lasting anything from minutes to days, with the whole group seldom seen together. Communities can consist of anything from 5 to 100 individuals. Chimpanzee societies are completely hierarchical and male dominated and males stay in the groups they were born in for life. Chimpanzees reach sexual maturity around 10 years of age with inter-birth intervals of approximately 5 years. 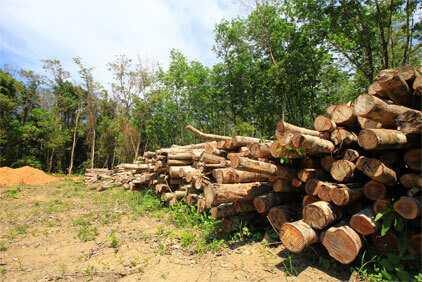 Industrial expansion, intensification of agriculture, legal and illegal logging, ever-increasing human population encroachment, the need for fuel (firewood and coal) and overgrazing have all contributed to major habitat loss for countless species in the tropics. For chimpanzees logging has created direct (loss of habitat) and indirect effects (climate change, soil erosion, loss of biodiversity etc) that increase their vulnerability to extinction. New roads cleared for logging also create access points to areas previously not accessible to hunters and developers.

Due to our genetic similarities, chimpanzees are highly susceptible to any disease humans can acquire. Increasingly diseases such as ebola, influenza, polio, tuberculosis and various parasitic diseases have caused significant mortality in chimpanzees. This is all intensified as human populations, tourists and even well-meaning researchers encroach on ape habitat.

Increasing human populations result in a greater demand for cheap and fresh protein sources. As many areas in the tropics are unsuitable for livestock rearing and farming, bushmeat provides a seemingly easy alternative protein source. This trade has however reached unsustainable levels and many species are being pushed closer to extinction in order to satisfy the protein demands of humans. Although chimpanzees are a protected species, hundreds of these great apes are still landing up in meat markets, an occurrence that has increased with escalating access to guns and previously inaccessible forests. Great apes are often selectively targeted for bushmeat owing to their big size and once adults have been killed, orphan infants can secure further income by being traded as pets.

As human and chimpanzee habitats are increasingly becoming closer due to expansion, human-chimp conflicts are on the rise and many chimpanzees are killed when crop raiding or of they present a specific risk to humans (e.g. killing children). As bushmeat hunting is rife in many tropical habitats, chimps are often accidentally caught in snares and even if the snare does not kill them, infections from the injury sustained can be strong enough to kill them.

The growing need for sanctuaries is directly related to the steady increase in illegal hunting which results in orphaned chimpanzees.

PASA sanctuaries were created over the last three decades to accommodate the staggering numbers of orphaned and unwanted chimpanzees, gorillas, bonobos and other endangered primates in Africa.Rehabilitation projects for release back into the wild are problematic and have had limited success. At present specially built sanctuaries remain the main alternative.

The Pan African Sanctuary Alliance (PASA) was created five years ago to unite the African sanctuaries that had emerged as a response to the deforestation, bushmeat, human encroachment and disease that was decimating wild primate populations. Some of the sanctuaries are now far beyond capacity with no let-up in sight – the number of chimpanzees at PASA sanctuaries increased by 59 percent in the five years from 2000.