Gorillas are the largest primate species alive today. Adult males can weigh up to 200 kg while adult females weigh approximately half that. Compared to other great apes, gorillas have a much broader chest, heavier necks and fine dark brown coats. A major difference between eastern and western gorillas is that western gorillas are lighter, it is thought this helps to climb trees to eat fruit which plays a much bigger role in western gorilla’s diets. 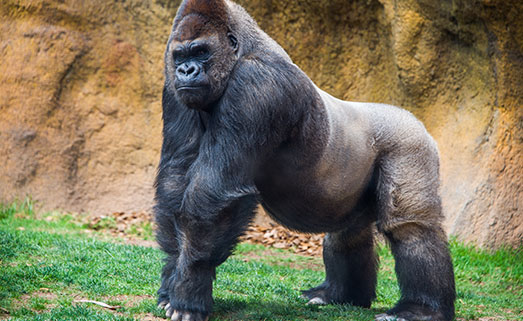 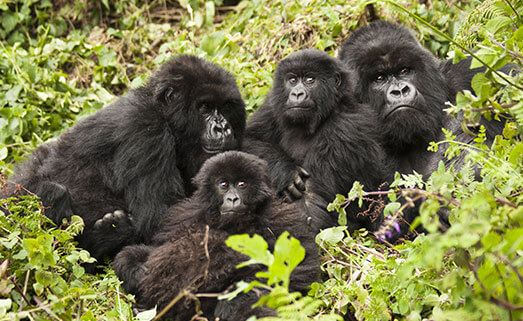 G. g. diehli - 250 to 300 individuals spread between at least 10 localities on either side of the Nigeria-Cameroon border in an area approximately 8,000 km. The small and fragmented population of Cross River gorillas is now restricted to mainly highland areas due to human hunting pressures in the lowlands. 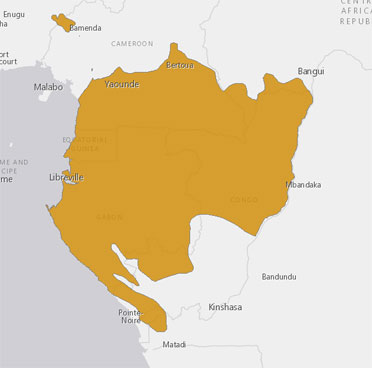 G. g. gorilla – Western lowland gorillas are found in Gabon, Angola, Republic of Congo, Central African Republic, Cameroon and mainland Equatorial Guinea. They used to be widespread throughout West and Central Africa but have become locally extinct in some areas, including in the Democratic Republic of Congo. The total population was assumed to be around 50,000 based on density estimates being projected across all intact habitat in western equatorial Africa and taking into account the scale of commercial hunting and outbreaks of Ebola virus. However, a recent census covering 47,000 km in the Republic of Congo estimates that there are approximately 125,000 western lowland gorillas in this area alone.

Click to see a map of the distribution of g.gorilla 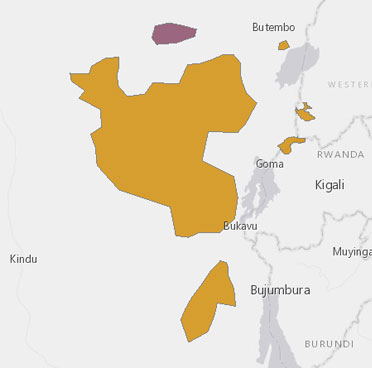 G. b. graueri - Eastern lowland gorillas occupy an area approximately 21,600 km in eastern Democratic Republic of Congo. In 1995, their population was estimated at 16,900 individuals but in the last decade their numbers are thought to have declined dramatically and the population has become increasingly fragmented. Due to political instability in the area, current population estimates are not available.

Click to see a map of the distribution of g.beringei

Gorillas eat fruit, seeds, leaves, stems and bark as well as ants, termites and other insects. Dietary choice is limited by their non-fermenting stomachs, (which can’t digest too many mature leaves) and on food availability. Mountain gorillas in the Virungas eat mainly herbaceous leaves and shoots, while those in Bwindi eat more fruits. The type of food available influences daily activity. The mountain gorillas in the Virungas have to spend the majority of daylight hours feeding and resting due to the low quality and poor digestibility of their diet. Herbaceous vegetation is abundant, and groups typically only range about 5 – 11 km2. Western gorillas typically rely more on fruit and due to the dispersed nature of fruit trees they are forced to have more mobile lifestyles. A typical western gorilla group home range is in excess of 20 km2. This often means there is overlap between the ranges of neighbouring groups and encounters can occasionally be violent. 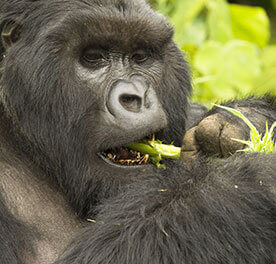 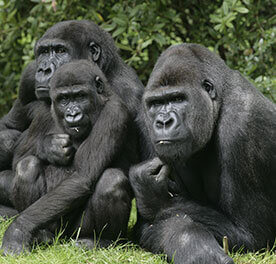 At the age of about 12 years old, male gorillas develop a saddle-shaped area of silver hair on their backs and become known as silverbacks. It is the silverbacks that dominate the family group. Groups typically contain between seven and 16 individuals, usually one silverback, several adult females and their offspring. Groups sometimes contain a second silverback when males born to the group have remained through adolescence. It is more common, however, for maturing males to leave their natal group to establish a group of their own. Females also transfer between groups, usually following the death of the silverback. Female can conceive their first offspring at 8 or 9 years old and can give birth every four years. 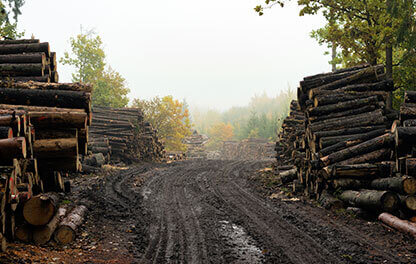 Deforestation and habitat degradation threaten all gorilla subspecies but this is particularly so for the mountain gorilla and Cross River gorilla which have restricted ranges in areas with high human population densities. Forest is cleared to make room for agriculture and remaining forest patches reduce in size and become fragmented. Roads and settlements that are built between forest fragments can effectively create gorilla subpopulations between which gene flow is limited resulting in increased inbreeding. Expansive areas of forest with low human population densities, such as those found in Gabon and the Democratic Republic of Congo, are also at risk as they are allocated as logging concessions. Once logging roads have been built, the forests are opened up and settlements follow. Commercial hunters often make use of logging trucks to travel deep into the forest to hunt and to transport their bushmeat to urban markets. Indeed the loggers themselves often employ hunters as few other sources of protein are available in remote forest areas. Aside from deforestation and forest degradation, the threats facing the four gorilla subspecies differ.

Hunting for meat is thought to be the most immediate threat to western gorillas, which are hunted in all range states. During a five month survey of bushmeat markets in southwestern Cameroon, more than 600 gorilla carcasses were recorded. Due to the slow reproductive rate of gorillas, even low levels of off take are unsustainable, but the increasing hunting pressures caused by the commercialisation of bushmeat are having a devastating impact on western gorilla populations. In Gabon, hunting was the primary reason for a 56% decline in western lowland gorilla abundance from 1983 to 2000. Infant gorillas have little value as meat, so those that survive the hunt are sold as pets. However, orphaned gorillas rarely survive more than a couple of weeks once captured. Those that are seized by law enforcers and taken to primate sanctuaries are in the minority, most are less fortunate.

Disease is another serious threat to western gorillas. Gorillas are susceptible to many of the same diseases as humans and as human encroachment into the forest increases so to does the likelihood of disease transmission. While gorillas may be getting diseases such as meningitis, tuberculosis and measles from humans, humans are also getting diseases from the gorillas – notably Ebola virus. Recent Ebola epidemics in West Africa have affected the western lowland gorilla in Gabon and the Republic of Congo. The virus has a 95-99% mortality rate in gorillas and it is thought to have contributed strongly to population declines in Gabon. Surveys conducted in six areas before and after Ebola emerged suggest that on average 74% of the gorilla population perish during an outbreak. The recent Ebola outbreaks in humans appear to have stemmed from the handling of infected great ape meat. 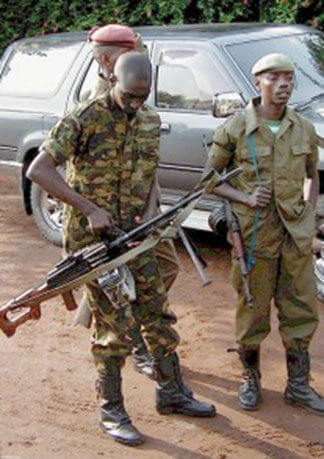 Among the main threats facing the eastern gorillas are political instability and armed conflict. The range of the eastern lowland gorilla and sections of the Virungas have been occupied by rebel militia for more than a decade. To finance their campaigns, various armies have been mining five main natural resources in the Democratic Republic of Congo – diamonds, copper, cobalt, gold and coltan. Professional hunters provide meat for the miners and it is believed that the eastern lowland gorilla has been particularly affected by this hunting pressure. Refugees put additional pressure on gorillas and their habitat through the harvesting of fuel wood and increased hunting when other sources of food are in short supply. Often snares set for other mammals, such as antelope, maim or kill gorillas. Since 2003 there has been a resurgence in the poaching of both eastern lowland gorillas and mountain gorillas for the illegal pet trade. Political unrest makes conservation efforts difficult as there is a real risk to project staff and many dedicated individuals have been killed undertaking their duties.

The Pan African Sanctuary Alliance (PASA) ensures that all member sanctuaries abide by a Code of Conduct which stipulates that sanctuaries must exhibit a concern for primates, integrity, transparency, fairness, conscientiousness, professionalism and an institutional commitment to conservation. There are four PASA sanctuaries that care for and rehabilitate orphaned gorillas – Limbe Wildlife Centre and Cameroon Wildlife Aid Fund (Cameroon), Project Protection des Gorilles (Gabon) and Project Protection des Gorilles Congo (Republic of Congo). These sanctuaries currently care exclusively for western lowland gorillas, except for Limbe Wildlife Centre which also has a Cross River gorilla. There are plans to establish a sanctuary in a stable region of eastern Democratic Republic of Congo for eastern lowland and mountain gorillas. Currently 12 orphaned eastern gorillas are being cared for by The Dian Fossey Gorilla Fund International in partnership with the Mountain Gorilla Veterinary Project, but these victims of poaching are held in temporary facilities in Rwanda and Democratic Republic of Congo.

Sanctuaries play a vital role in law enforcement and education. Without sanctuaries, facilities for confiscated gorillas would be basic, where they existed at all, and there would be limited incentive for officials to conduct confiscations. Sanctuaries not only provide appropriate housing conditions for orphans but they also help to ensure that the laws regarding the capture and sale of prohibited species, such as gorillas, are enforced. People living in urban areas loose their connection with nature and often do not know what a gorilla is or how one behaves. Sanctuaries serve as effective education centres where local people can have the opportunity to watch the behaviours of the gorillas in a fairly relaxed setting. Sanctuaries are also ideal for school trips and can attract large numbers of visitors. This represents many opportunities for spreading the conservation message.