South East Asia is home to three species of orangutan; the Sumatran and Bornean orangutan plus the newly discovered Tapanuli Orangutan. All species spend almost all of their time in trees and have distinctive body shapes with longer arms than legs and coarse shaggy red hair. Geographically isolated on two separate islands, these great apes show obvious physical differences between the species, with the Sumatran orangutans being more gracile, with elongated faces and a paler and longer-haired coat. There are also obvious differences between the sexes, with males often double the size of females with large throat pouches and noticeable cheek pads. 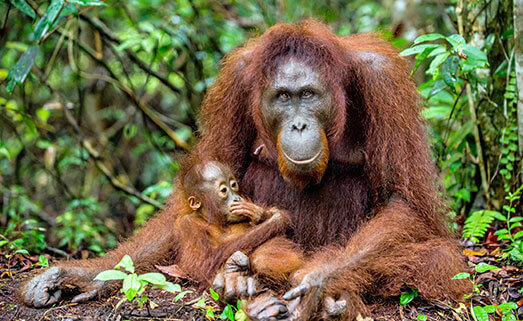 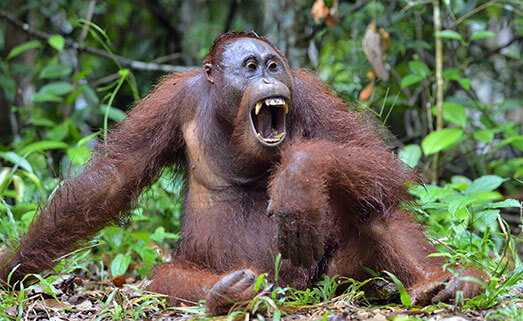 Although once widely distributed across south-East Asia, Bornean orangutans are now restricted to 150 000 km2 habitat on the island of Borneo, with the largest population in Kalimantan, the Indonesian part of the island.
Click here to see the current distribution of Bornean Orangutans.

Sumatran orangutans are restricted to an incredibly small range of 26 000km2 in the northwest of Sumatra
Click here to see the current distribution of Sumatran Orangutans. 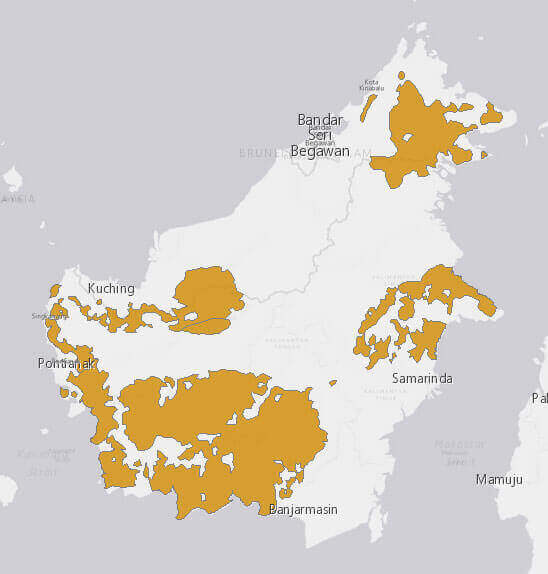 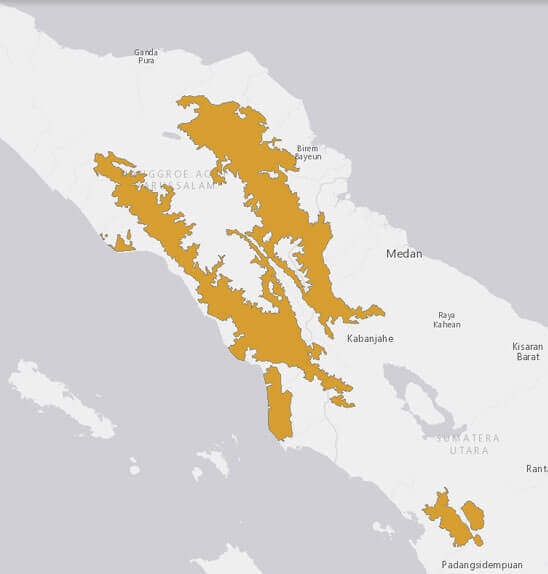 Orangutans eat over 400 different types of food; however the majority of their food is fruit especially wild figs. When fruit is scarce, orangutans will feed on seeds, leaf shoots, bark, insects, flowers, honey, eggs and soil. Orangutans spend on average 95% of their time feeding, resting and moving between feeding and resting sites and have two main activity peaks; one in the morning and the other in the afternoon. 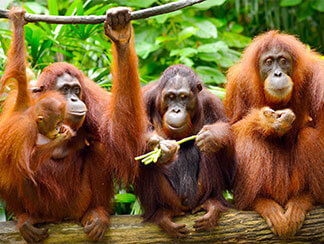 Orangutans are more solitary than the other great apes in Africa. Adult males have large home ranges overlapping with one to several females. Females live with their offspring in discrete home ranges that overlap with other adult females. Adult males have interactions only with females in oestrus. Occasionally sub-adult individuals form groups, however these do not last into adulthood. Females reach maturity around 14 years of age and orangutans exhibit the longest inter-birth intervals of around 8 years, and infants are completely reliant on their mothers until around 2 years old. Males reach sexual maturity between 8 and 15 years however do not show secondary sexual characteristics and long-calls until around 15-20 years. Males listen to the movements of each other with the help of their vocalizations that can be heard from afar and when meeting they show threatening display to each other. Territorial fights depend on the presence of females, though they are very rare and displaying behaviour is more frequent.

The single greatest threat to orangutans is loss of habitat. In the past two decades, 80 percent of orangutan habitat has been destroyed due to illegal logging, mining and agricultural conversion.

Palm Oil - The rapid expansion of oil palm plantations across Borneo and Sumatra has already involved the clear-felling of millions of hectares of forests, and all unprotected lowland forests are vulnerable to eventual future conversion. Loss of habitat due to palm oil plantations coupled with increased orangutan-human conflict puts enormous stress on orangutans living in or around palm oil plantations. As the world continues to demand more palm oil, more orangutans and other endangered species will be put at risk.

Invasive Species - As we share many genetic similarities with great apes, orangutans are highly susceptible to any disease humans can acquire. Increasingly diseases such as influenza, polio, tuberculosis and various parasitic diseases have caused significant mortality in orangutans. This is all intensified as human populations, tourists and even well-meaning researchers encroach on ape habitat.

Harvesting - As habitat is cleared for agriculture many displaced orangutans are caught and either killed for meat or captured for the illegal pet trade. Orangutans also make perfect targets for hunters due to their slow movement and large size. Although eating ape meat is considered a taboo in some areas, even a small amount of hunting can drastically impact on orangutan populations.

Persecution - Orangutans are increasingly being persecuted as pests when resources become scarce and in order to feed, have to venture into agricultural areas to steal food resulting in occasional poisoning or shooting.

Natural Disasters - Climate change has already impacted negatively on Bornean orangutan populations; the drought during El Nino in 1997/8 led to millions of acres of forest lost due to uncontrolled fires, this directly resulted in the death of thousands of orangutans (almost 33% of all orangutans in Borneo). The combination of logged forests which increases the fire-risk and climate instability could lead to many more orangutans losing their lives in both Sumatra and Borneo in the future.

Intrinsic Factors - There are a number of intrinsic factors that make orangutans vulnerable towards specific environmental disturbances. Long interbirth intervals, extended periods of development and reproductive suppression in times of fruit scarcity all play a large part in reducing population recovery. In addition, orangutans are poor dispersers and are hesitant to move across open areas cleared by agriculture or logging- this can often result in inbreeding and increased stress on already stressed populations.

Other Factors - Orangutans are often collected from the wild for the entertainment industry and specific TV shows showing orangutans as pets fuel the demand for illegal trade. Political instability and corruption in areas can lead to a decrease in law enforcement and increased pressure on ecosystems to support local communities.

The Role Of Sanctuaries

The growing need for sanctuaries is directly related to the steady increase in habitat disturbance/loss which results in the displacement of great apes. Primate sanctuaries were created over the last three decades to accommodate the staggering numbers of orphaned and unwanted orangutans in South-east Asia. 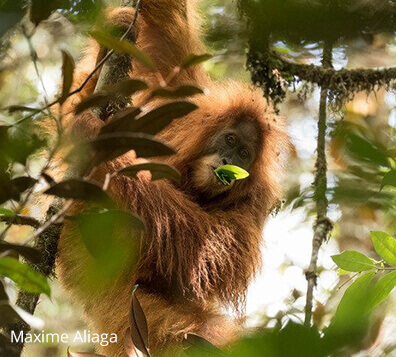 A new orangutan species has been discovered in the forests of Sumatra. The Tapanuli orangutan has been identified as the third orangutan species, and the seventh non-human great ape. However the new species is even more critically endangered than the other two species already known as there are only 800 of them and they live in an area smaller than London.

For years, researchers have recognised two species of orangutan living in Indonesia: the Bornean orangutan (Pongo pygmaeus) and the Sumatran orangutan (P. abelii). Both are critically endangered.

In the late 1930s there were reports of a population of orangutans in Tapanuli, in the Batang Toru area, south of the range of Sumatran orangutans, but the claims were never fully investigated. The Tapanuli population was only rediscovered in 1997 by Erik Meijaard at the Australian National University in Canberra.

Initial genetic studies suggested the population was unique, perhaps unsurprisingly, given the nearest orangutan neighbours were 100 kilometres away. Then in 2013, a male Tapanuli orangutan called Raya died of his wounds after a conflict with local villagers. Finally, scientists were able to study a Tapanuli specimen and compare it to its Sumatran and Bornean brethren. 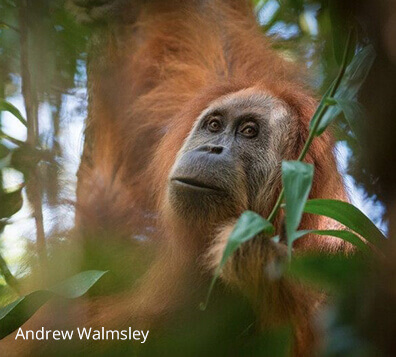 Michael Krützen at the University of Zürich in Switzerland helped assemble a team of nearly 40 people to study Raya. They compared Raya’s skull and teeth with those of 33 other orangutans. Raya’s skull was smaller than that of the other two species at comparable developmental stages, and his upper and lower canines were significantly wider than Sumatran orangutans’.

The Tapanuli orangutans also behave differently. Male orangutans make “long calls” that can be heard over a kilometre away, which repel rivals and attract females. Tapanuli males’ long calls were 21 seconds longer than those of Bornean ones, and their roars were delivered at a higher maximum frequency than those of Sumatran orangutans.

Finally, the researchers analysed 37 genomes from various orangutan populations. Once again, the Tapanuli orangutans were significantly different from their Bornean and Sumatran cousins.

“Scientific serendipity brought everything together and it dawned on us that this is a new species,” says Krützen. They named it Pongo tapanuliensis.

“Orangutans must be among the most intensively studied tropical species, and they are also a famous conservation icon,” says Meijaard. “How could this distinct species slip through and stay hidden to science for such a long time?

“The justification for this classification is as strong as the justification for splitting Gorilla or Pan [chimpanzees],” says Erin Vogel at Rutgers University in New Brunswick, New Jersey. However, she says the anatomical data should be taken with caution until more skeletons are examined. 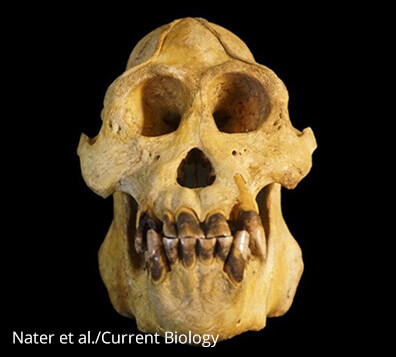 The genetic analysis also offers a glimpse at the evolutionary history of orangutans.

That makes the Tapanuli orangutans the oldest of the three species. Krützen says they may be the descendants of orangutans that migrated from mainland Asia to what is now Indonesia more than 3 million years ago.

It is unclear why the three orangutan species formed when they did. However, shifting climates may be a factor.

Throughout much of the last 2.6 million years, sea levels were lower than today, because Earth was in an ice age and much water was locked up in the poles. As a result, the Indonesian islands of Borneo, Java and Sumatra were often connected to mainland Asia, forming a landmass the size of Europe known as Sundaland. When the ice periodically melted and seas rose, the islands became cut off as they are today. Conceivably, the three orangutan species diverged when populations became isolated on these islands.

But the Tapanuli orangutans’ history may be coming to an end. They are confined to an area of about 1000 square kilometres. Modelling suggests that if more than 1 per cent of the adult population – that is, eight of the 800 animals remaining – is removed per year, the species will go extinct, Meijaard says.

Just based on population numbers, Tapanuli orangutans may be the most endangered of all great apes, says Vincent Nijman at Oxford Brookes University in the UK. Most other great apes have populations in the tens of thousands.

The species is primarily threatened by hunting and poaching, and forest loss due to agriculture plantations and mining exploration, says co-author Matthew Nowak at the Sumatran Orangutan Conservation Programme. What’s more, a proposed hydroelectric project threatens 8 per cent of the orangutans’ habitat.

Krützen and Nowak are also concerned that their habitat is becoming increasingly fragmented. The Tapanuli occupy three areas in the Batang Toru region. Forested corridors enable the apes to travel between the three habitats, but these are disappearing, trapping the Tapanuli in the smaller habitats. This is causing inbreeding, which poses an additional threat by allowing harmful mutations to build up. Krützen says Tapanuli orangutans are more inbred than both Sumatran and Bornean orangutans.

For now, the researchers hope to galvanise conservation efforts to protect the Tapanuli orangutans’ habitat. ”If we preserve the Batang Toru forest for these orangutans, we also protect numerous other species that we might not even know existed and don’t have this flagship status,” Krützen says.