How Your Money Is Spent For Great Apes 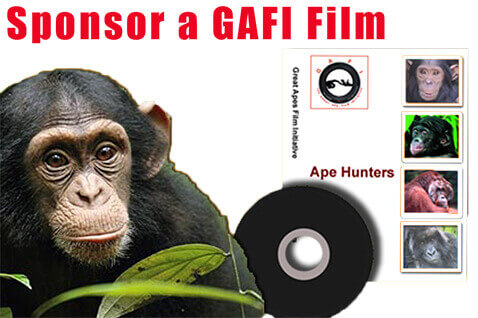 GAFI has a number of television programmes and series about Great Apes which have been tested for effectiveness with local communities in Africa and SE Asia. These programmes form the basis of the screening projects that we do and they are highly successful in creating debate and subsequent implementation of local solutions to environmental and species issues with the audiences who watch them. The demand for these programmes is overwhelming and GAFI aims to provide the existing library to every request that we receive. This means that we need funding for sets of films to be copied and delivered to new non-government organisations, national TV audiences and government ministers in the countries it already works in, plus of course we have 9 new countries to begin work in.

£5 will buy a tree to help to replace the decimated forest.
£10 will pay for fuel to get the Pedal Powered Cinema to a local school.
£15 will produce a DVD copy of a film to raise awareness in Africa, Malaysia or Indonesia.
£100 will provide a complete set of the film library to be used in schools, on public transport, in public venues, in wildlife management centres, in universities and be given to local decision makers in support of local conservation policy and law enforcement.

The existing GAFI library consists of programmes that have been made by filmmakers and broadcasters across the world who have waived their distribution fees so that GAFI can screen the films without having to pay for the screening rights. All of these films are powerful, educational and leave the audience with information that can help them to make different decisions in tackling environmental issues that will affect their future.

However, the GAFI library is limited in its scope. The majority of the programmes were not made with specific conservation actions in mind, they were made to inform international audiences so they are produced in English or French. Feedback from our audiences across Africa and SE Asia tells us that , after seeing the existing library, local communities want to see more films but the new films should be about local issues in the local languages and feature local people. GAFI is able to produce and provide such highly localised content through its production arm at Nutshell Productions and through collaboration with filmmakers, NGOs and local media groups. This is as grass roots as it gets, local people making local films about local issues....and offering local solutions to the problems.

£2000 will produce a film about one of these issues. The film can be distributed throughout all the communities affected by this issue providing education and support for local solutions.

The ultimate answer for raising awareness at a local level is to train local people to create their own films for their own local issues. GAFI aims to train 4 people in each Great Ape range state to produce their own films. We will do this by: 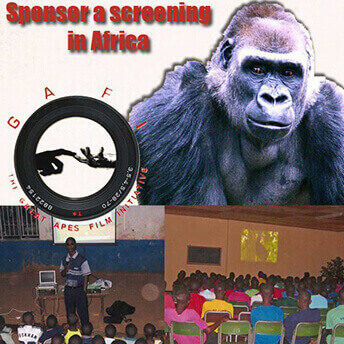 GAFI screenings are at the heart of everything we do. Without the screening programme over 300 million people would not have been informed and empowered by our film library. The screenings have different target audiences depending upon their content and the intended impact of environmental solutions.

GAFI screening programmes travel to remote regions where screening facilities do not exist. Using our pedal powered cinema allows us to show the films to some of the communities in most need of support. The work of GAFI could not take place without the equipment to show our films in and hundreds of thousands of local people would not have been able to view the films, debate the content and make decisions about a local response. Once procured, this equipment would remain with our partner organisations and could be used regularly to reach countless people during outreach programmes.

£300 will provide a screen for the films to be viewed upon.
£5000 will buy a new pedal powered cinema and transportation to a great apes range state. 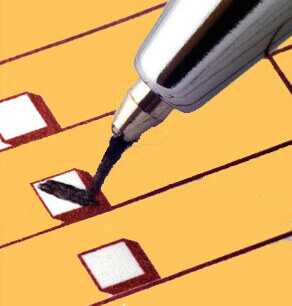 GAFI screenings are assessed by the audience through a questionnaire that they complete after watching the film and discussing it with a local educator. Many excellent suggestions are recorded within the questionnaires and GAFI aims to adjust its screening programme and approach accordingly. In order to ensure we are answering the suggestions of the audiences questionnaires need to be printed and the completed forms need to be analysed to help us to establish how best to support each community on a local level. This feedback has been vital in deciding how the screening programme should be most effective and appropriate for each audience. 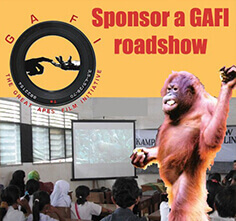 These extensive campaigns cost only £5000

£3 will buy one cabbage seedling to feed the Wildlife Clubs of Uganda children who are key to implementing conservation on the ground.
£5 will buy one indigenous tree sapling to help to replace the decimated forest.
£7 will buy a fruitfuel tree sapling to feed children from a local community.
£50 would pay for a Young Ambassador for Great Apes ( teenager) to visit a local school to talk about protecting the forest and the Great Apes.
£300 will buy fruit trees to create a tree nursery, enabling a local community to have fuel.
(reducing the pressure on the local forest) and an on- going income (linking the value of conservation to earning an income).

If you have some spare time you would like to do something that would really make a difference to great ape conservation, please get in touch.

In order to consume ethically you need to support the good companies, and withdraw support from the bad ones- you have the power to make a difference every time you go shopping!