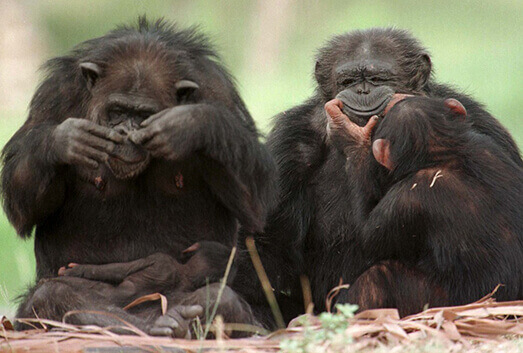 Scientists have found a way to measure if people intuitively know what ape gestures mean.

In the video I’m watching, a chimpanzee reaches out and lightly grabs its partner’s mouth. “Give me that,” it might be saying. Or perhaps, “Stop it.” In another scene, two chimps are sitting in a tree and one of them shakes a branch. Perhaps it wants to be groomed, or followed, or carried. In yet another clip, a chimp holds out its hand. Is it seeking companionship, asking for food, or demanding sex?

The videos are part of the Great Ape Dictionary, an online experiment led by Cat Hobaiter and Kirsty Graham from the University of St. Andrews. They and their team, led by the primatologist Richard Byrne, have spent years painstakingly cataloging the gestures of chimps and other apes, filming them in the wild and poring over the recordings to work out how each movement is used. And now, they want to know what people see in the footage. Do others who aren’t professional primatologists still have an intuitive sense for what ape gestures mean?

During the experiment, volunteers see 20 videos of chimpanzees and bonobos, each of which contains a single gesture. You see the action once in real time, and again in slow motion. Your job is to choose from four possible interpretations, and to rate how confident you are in your guess. In case it’s hard to work out what is happening, each video is accompanied by charming illustrations to show you what to look out for. (Graham, who did the stylized blocky drawings, calls them Bonobobots.)

In some cases, the task feels easy. When a chimp stretches out a palm it’s hard not to think that it’s asking for food. And, indeed, Hobaiter has shown that it often is. If a chimp flicks its hand at another chimp, it’s hard not to read that as a shoo—and again, that’s often the case. Anthropomorphism—the act of ascribing human characteristics to other creatures—is seductive, and these animals are as anthro as it gets. “You try to keep your objective scientist hat on,” she says. “But when you see a group of chimps and see what they do, you click straight into it.”

There are hugs, head rubs and hip-thrusts; bounces, bows, and bites; shrugs, strokes, and somersaults.

But chimp gestures are complicated, in much the same way human words are. Humans have successfully trained famous apes, like Koko the gorilla or Nim Chimpsky the chimp, to use sign language with us, but apes naturally use gestures to communicate with each other. In many ways, these actions are far closer to human language than the sounds coming from the animals’ mouths. The calls of great apes are typically emotive, like screaming in pain, whining in hunger, or hooting in happiness. Very rarely do such calls signal any meaning, and very rarely are they directed at a specific listener.

Actions, on the other hand, speak louder. A chimp will direct gestures to other chimps and use them with a goal in mind. It’ll typically wait after gesturing to see if anything happens, and repeat the action if nothing does. And it will gesture flexibly to achieve different goals in different contexts: A chimp stretching out its hand might be asking for food or offering support in a fight, just as a human raising a hand could be surrendering, saluting, or wanting to answer a question. Chimps use a wide gesticulatory lexicon.

In the 1980s, scientists began documenting a few dozen gestures by studying chimps in zoos. But captive animals turned out to have tiny vocabularies, as Hobaiter showed by tracking wild chimps in Uganda’s Budongo Forest Reserve. To do so, she had to keep pace with fast-moving, tree-living animals from the ground, while filming often subtle movements from weird angles and through obscuring foliage. And after that hard work, she had to pore over the footage, again and again, to note what the apes are doing and how their peers responded.

It would have been easy to read too much into any one interaction, but Hobaiter recorded thousands, and so could accurately work out what each gesture means. She eventually listed 66, which carry at least 19 different meanings between them. There are hugs, head rubs, and hip-thrusts; bounces, bows, and bites; shrugs, strokes, and somersaults. There’s even something that the team calls the “disco arms shake,” where a chimp will roll its arms toward itself.

Human gestures vary considerably between cultures, but ape gestures do not. Every individual uses the same gestures in the same ways, with apparently no room for idiosyncrasy. What’s more, different species of great apes use the same signals. While Hobaiter was watching chimps, Graham and other members of Richard Byrne’s team were observing bonobos, orangutans, and gorillas. And even though these animals have very different hands and styles of moving, they seem to share a common set of gestures. It seems likely that they inherited this repertoire from their common ancestor—and that we did too.

So even though humans have developed spoken language, could we still recognize the gestures of other apes, and intuit the meaning behind them? The team needed to show their accumulated videos to large numbers of people and gauge their reactions. And as luck would have it, Graham heard about a new online platform that allows scientists to design such experiments—and it’s called Gorilla. “I think they were slightly tickled to get an ape person applying,” says Hobaiter.

The experiment went live a few weeks ago, and already 7,000 people have tried it. Around half of them finished rating all 20 videos. “It’s not very easy, and it’s easy to get frustrated,” says Hobaiter. “But to an ape person who spends years getting a few hundred cases, that’s a mind-blowing sample size.”

It’s enough to make you do a disco arm shake.