Collecting Spoons to Save Gorillas 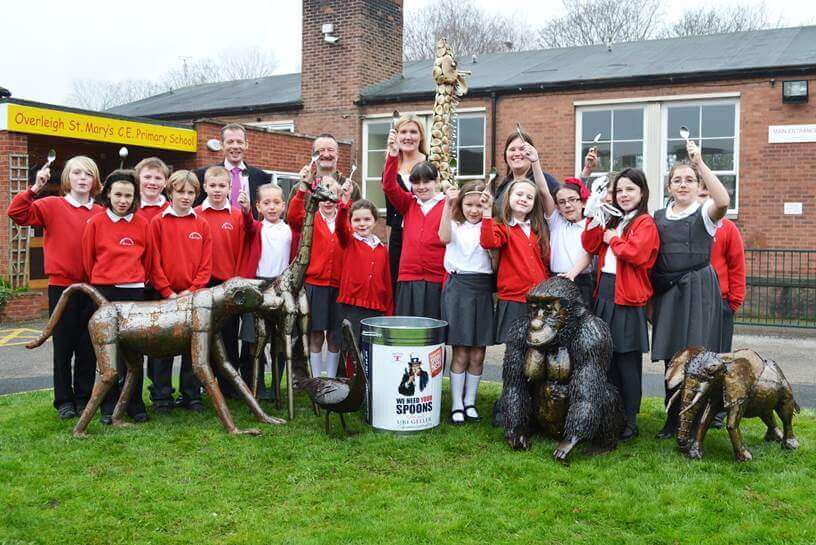 Children at a Chester school are collecting spoons which will help an international project to save gorillas.

The youngsters at Overleigh St Mary’s CE Primary School in Handbridge are helping the illusionist and self-proclaimed psychic to create a monstrous gorilla statue out of the old cutlery at the British Ironwork Centre in Oswestry .

Geller has asked the centre to create the sculpture from a mixture of iron and spoons collected from schools around the country.

The gorilla will be unveiled on Saturday, May 17 and then airlifted to Geller’s garden, where it will be a special feature for his charity open days.

The Overleigh children are involved with a project called GAFI (Great Ape Film Initiative) and members of the team will provide Geller with one of their new UK Pedal powered cinemas, showcasing a series of films about the conservation of the gorillas.

The pedal powered cinema is a portable set of equipment consisting of a DVD and projector, which is powered by pedalling a standard bicycle.

These cinemas are taken to the heart of the remotest communities in Africa and South East Asia, to show local people films about the importance of conserving their local environment, in particular the habitats of the Great Apes.

Clive Knowles, managing director of the British Ironwork Centre said “Without the British Spoon appeal we would never have known about GAFI. Now we are working to support each other, their cause is so important and we are quite literally honoured to be fortunate enough to assist.”

The GAFI team recently toured around the North West with a pedal powered cinema and are currently working with 12 Cheshire schools to develop conservation school twinning projects.

GAFI UK schools coordinator Nicky Bolton, a teacher at Overleigh, said; “We are thrilled to be attending the gorilla unveiling at the British Ironwork Centre. They have shown incredible support and enthusiasm for our work and have very kindly offered to make a second gorilla to fund the purchase of a new pedal powered cinema for Uganda. This is an ideal opportunity to recycle old spoons for an inspirational cause.”