GAFI’s Innovative Pedal-Powered Cinema roadshows are making a huge difference to the number of people who have access to our powerful films.

Conservation education is now reaching remote communities, villages with no electricity who have never before been able to see films. In the three weeks in October 2010 that the project has been running 11,600 school children, 184 teachers, 110 soldiers and 46 park rangers, all living around the Ugandan gorilla habitats, have seen the films.

That is a tremendous outcome for conservation education in Uganda. 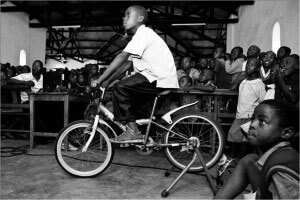 The pedal powered cinema will be an absolute boon to Virunga National Park, DR Congo. A cinema kit was delivered to Rumangabo, Park HQ, in March 2012.

Apart from being home to around a third of the world’s critically endangered mountain gorillas, Virunga is probably the biologically diverse National Park in Africa and is a ‘World Heritage Site, in Danger’. The rangers of Virunga work tirelessly to protect the wildlife of Virunga and are committed to finding means to raise awareness and understanding amongst the youngsters that live in and around the Park.

The communities living around Virunga have no electricity and the children, nor their extended families, will have ever seen a film. The pedal powered cinema is predicted to screen conservation films to over 75,000 children in over 100 of these remote schools during it’s first year alone. The rangers aim to follow up these screenings with talks and guided educational sessions throughout Virunga NP, Africa’s oldest National Park. The number of extended family members who crowd around to take a look at the films through windows and doors would numbers in the 100’s of thousands over time.

Virunga will be making their own specific films focusing on the issues affecting the future of the Park such as poaching and the illegal charcoal trade. The pedal powered cinema provides the perfect means to take positive conservation messages out to remote and isolated communities. It’s also fun and interactive, with children hopping on and off the bike that powers the screenings.

From having no effective means to communicate with the thousands of children and communities of Virunga, the rangers now have a simple, fun and very practical means of encouraging a much increased awareness and understanding of Virunga. That can only lead to much better informed and caring communities who understand that protecting the Parks habitats and wildlife will bring benefits to them both now aqnd long into the future.

After the first film screening at Rumangabo school (with 721 children) the pedal powered cinema was described by Park staff as ‘an awesome piece of kit’. A better endorsement would be hard to find……

G4G Gearing Up For Gorillas. GAFI partner G4G works tirelessly to support rangers who frequently put their lives on the line in their fight to protect gorillas from poachers and civil war. At the same time a pedal powered cinema was delivered to G4G the threat from fighting factions within DRC was so dangerous that the screenings had to be postponed. These have now commenced and are contributing towards the prevention of further loss of habitat and murder of gorillas for bushmeat.

Lwiro. "Provide the best possible care to orphaned primates in DRC, while working to ensure their protection in the wild. The Centre for the Rehabilitation for Primates for Lwiro was created in 2002 for two Congolese Institutions; Institut Congolais pour la Conservation de la Nature (ICCN) and the Centre de Recherché en Sciences Naturelles (CRSN). During the second war of DRC (1998-2004) the poaching increased frighteningly and they decided to give to the orphans a safe place to recover physically and physiologically. GAFI donated a pedal powered Cinema for the education programme which reaches more than 3.000 people per year. CRPL is also involve in the following activities:

GAFI provided a Pedal Powered Cinema to its conservation partner Les Amis des Bonobo’s to support its important outreach work. The Pedal Powered Cinema was provided to the sanctuary to allow them to increase their outreach screening programme and strengthen their work tackling the bushmeat crisis, welfare issues and environmental challenges faced by Bonobos

GAFI raised funding to provide a pedal powered cinema to give to the Cross River Gorilla education programme in Nigeria.

Wildlife Clubs of Uganda. In association with the Wildlife clubs of Uganda GAFI has implemented a hugely successful screening programme across South Uganda in the regions surrounding Kisoro Magahinga National Park and Ruhija Bwindi Impenetrable Forest. A strategic educational corridor has been created between the border of the Virunga Massif home to almost half of the Mountain Gorillas and Bwindi National Park where the remaining Mountain Gorillas live further North. Screenings have reached many different audiences, including over 200,000 school children in towns and remote areas, parents, farmers, local Batwa tribes, wildlife management centres, rangers, Ugandan army, politicians, media broadcasters, and the Ugandan Education Minister. As a result tens of thousands of trees have been planted, teenagers have become Young Ambassadors for Great Apes, additional wildlife clubs have been created. In addition a GAFI Schools Programme has linked 6 Ugandan schools with UK schools, whereby science equipment for environmental projects , school books, and other supporting material has been provided. The children have a pen pal scheme operating and write to each other every 4 months.

KasiisUNITE New Nature Foundation. GAFI and the Ape Alliance raised funds at the Hope 4 Apes event hosted by Sir David Attenborough at the Savoy Hotel which allowed it to donate a pedal powered cinema to be shared amongst the three conservation organisations who will each use it on a rotation basis for their education outreach work. 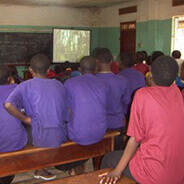 GAFI trialled its first pedal powered cinema with a local education outreach project in association with the Gorilla Organisation.

In 2005/6 GO received copies of 7 BBC programmes in English in DVD format for use in Uganda as part of the Great Apes Film Initiative.

The GAFI concept was introduced to a group of influential people at a small reception in Kampala, where edited highlights were shown from the BBC programmes using a large screen digital projector.

One request, from the head of the Uganda Wildlife Authority, was to ask if the film “Cousins”, in particular, could be shown on public broadcast television in Uganda promoted through discussion slots, talk shows and news items. 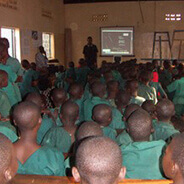 After showing the films to the head of Wildlife Clubs of Uganda (WCU), one of east Africa’s oldest conservation organisations, with branches in most of the schools in Uganda, they agreed to use WCU to make inroads into the schools.

The first recipients of GAFI films were 200 children at the Speke Resort on Lake Victoria, followed by 80 children from five schools. The screening was held at the Uganda Wildlife Education Centre in Entebbe. Both events were a roaring success and as UWEC is one of the region’s busiest attractions for families and schools, the films have a massive audience. Both WCU and UWEC are keen to continue with GAFI projects into the future. Since the beginning of the GAFI Pedal Powered screenings in Uganda over 100,000 people have seen films on the conservation of great apes and their environments.

GAFI pedal powered cinema screening programme has had phenomenal success in Uganda since 2007/8, targeting the specific areas of Kibale and Kisoro which are adjacent to forests containing more than half of the remaining mountain gorillas.

An overwhelming number of people gathered in churches, schools and community centres to watch the films. Field challenges included, ever increasing fuel prices, very large attendance numbers without matching space to accommodate people- consequently the films had to be shown in shifts which resulted in long journeys back to towns/remote areas.

In addition due to lack of space, some people had to be turned away which was very frustrating and disappointing for them. Sadly 8 schools were unable to make screenings due to the distance they would have to travel to the screening venue and lack and expense of transport.

The most incredible testament of the desire of young children to watch GAFI films, and the tireless work of the GAFI Head of Education in Uganda, Denis Agaba, to ensure everyone had access to watch conservation films came from the Ndeego region. This area is extremely remote with very poor roads; nevertheless children from 6 different schools in the region had walked 20 miles to reach a very big community church suitable for screenings. Thanks to the dedication of the staff and the patience of the children, screenings were held in shifts in a small room of the Ndeego Senior Secondary School. The available room could accommodate 50 people, so films were shown the whole day on repeat until every last person had seen the film.

However, despite all these challenges, in just 10 days, 9527 people had watched GAFI films, with 42 schools participating in the screenings and 200 questionnaires being completed. Feedback from the projects has provided us with exciting new opportunities for future work in Uganda and as usual our list of community based organisations interested in GAFI screenings grows monthly.

A GAFI Pedal Powered Cinema was donated to Tacugama Chimpanzee Sanctuary. Tacugama was established in 1995 to enforce the law and rehabilitate confiscated , orphaned and abandoned chimpanzees with the aim of releasing them back into their natural habitat. It is illegal to trade or kill chimpanzees but the practise continues so Tacugama currently cares for 75 chimpanzees in several forest enclosures. GAFI screenings using the Pedal Powered Cinema will support Tacugama through education programmes and community sensitisation.

European Parliament: GAFI was invited to present a pedal powered screening of one of its conservation films to an audience of Euro MPs and staff. Ian Redmond OBE, Chief Consultant for Great Apes and GAFI Director joined Madelaine Westwood in explaining the power of engaging local communities in this way and the many benefits that have resulted from the GAFI screening programmes in 15 countries. A news item about the pedal powered cinema screenings was filmed at the event and distributed to all stations across Europe.

GAFI began its Pedal Powered Screening to UK schools in 2013 since when the GAFI schools twinning programme has expanded rapidly.

Pupils from Overleigh St. Mary’s Primary School joined with GAFI Director Madelaine Westwood and UK Schools Coordinator Nicky Bolton to bring pedal power to a gorilla themed event at the British Ironworks Centre in Oswestry. The British Ironworks have very kindly agreed to make a gorilla for GAFI to be auctioned at our next major event. 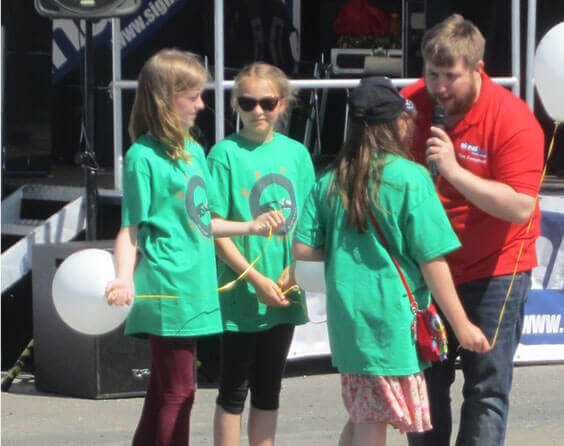 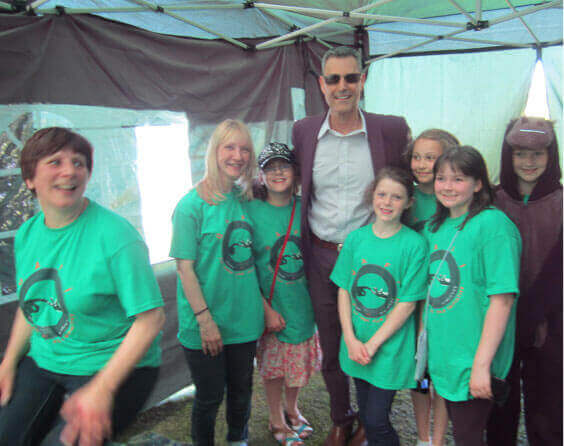 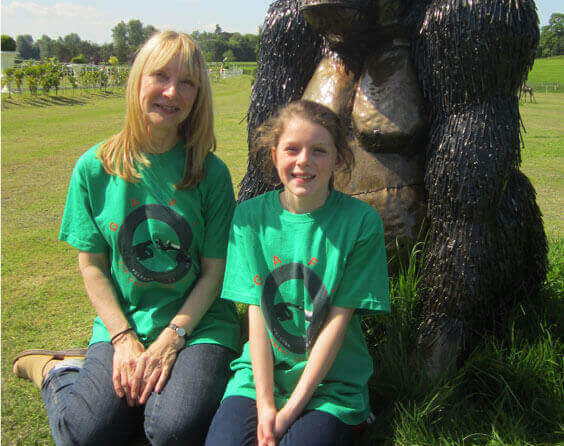